It all seems too similar. It’s even weirder that it never occurred to me these two, simple logos have the above similarities, and I’ve been eating at both restaurants for years.

But I feel I may have to start to choose between the two. Louisville’s Courier-Journal reported  “Zaxby’s has filed a trademark infringement lawsuit against Louisville-based Joella’s Hot Chicken over similar logos.”

I stopped and thought about why I never recognized the resemblance before, and I landed on this phenomenon: I associate the branding and atmosphere of Zaxby’s with more of a family, corporate vibe. Then, I associate Joella’s branding with a more local, friendly experience. But this sense of localness isn’t exactly true since both restaurants share the same locations in Florida, Georgia, Indiana, Kentucky and soon to be more.

Those dates in mind, it’s apparent who had their talon in the hen house first.  But is it right for Zaxby’s to ask Joella’s to “destroy,” according to the suit, “any and all menus, packaging, containers, signs, packaging materials, printing plates, apparel, and advertising or promotional materials” that feature the “infringing” logos?

According to Harvard, a trademark is a word, symbol, or phrase, used to identify a particular manufacturer or seller’s products and distinguish them from the products of another. Harvard also states that trademark infringement under the Lanham Act  15 U.S.C. §§ 1114, 1125  involves confusion and, “to be more specific, the use of a trademark in connection with the sale of a good constitutes infringement if it is likely to cause consumer confusion as to the source of those goods or as to the sponsorship or approval of such goods.”

Personally, I don’t see how you get confused with wanting to go to a hot chicken place with a larger corporation that doesn’t offer hot chicken, but I know that the menu items aren’t the focus here. Stop thinking about food, Sarah. Although when I think about travelers and how they might come across highway signs for both locations within a single road trip, I can see how there might be confusion with the circle logo.

I believe there’s an easy fix here for what I am calling the “change-your-logo-NOW” demand. Joella’s has another logo they currently use on their website and packaging. They could use that one. Except, even that branding is suspiciously close to Nashville’s Hattie B’s hot chicken.

As a graphic designer myself, I have to ensure my logo creations aren’t similar to other logos in the wild.

I don’t over research. At least not anymore. There was a time where I couldn’t get enough of pinning every hip logo in sight or couldn’t stop a strolling down Dribbble Lane. Now I can admit, after a while of scrolling, everything is starting to look the same.

I’ve resolved that now is the time to experiment with design on my own and quit peeping at other artists. It’s more likely that your design will be unique if you just keep tweaking on your own.

Create a mood board of colors, shapes, textures, words or phrases, for yourself and/or the client for an hour and then tell yourself you will STOP browsing another artists’ work. You’ll thank yourself later. This way you can’t accidentally plagiarize other artists and are still inspired by other creatives!

Mood boards are great for guidance, and I absolutely recommend them for the beginning of every design project. But, as I mentioned, there needs to be limitations, so our minds aren’t actually removing all of the creativity by plagiarizing. 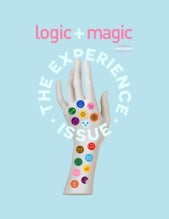